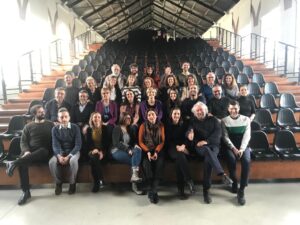 The Coronavirus has had a drastic effect on the world of culture. Many people are asking themselves what their real economic losses will be, while hoping that special provisions will be made for all those affected. The Fitzcarraldo Foundation supports operators in the field of culture. We are dedicated to assisting the most vulnerable people, freelance, and irregular operators, by endorsing concrete measures aimed at mitigating the effects of the Covid-19 crisis. Two initiatives which the Foundation is directly involved in are presented below:

The report sent to the Italian government

The fragmentation of the cultural world, mainly composed of small- and micro-businesses, and characterized by informal or precarious types of contracts, constitute a taxonomy which is difficult to classify regarding the provisions established to assist and sustain operators during the critical phase of the crisis, which is so essential in safeguarding this specific ecosystem. During these weeks characterized by the sense of emergency we have continuously debated what our role should be regarding the issue, having originated in a surreal situation that is totally unprecedented in our post-war experience, and in which we never imagined finding ourselves. Based upon our vision, and in virtue of our skill set, we have drafted a report that aims to bring the government’s attention to the issues faced by the “invisible” operators in the cultural sector – those who have types of contracts as yet unrecognized by assistance provisions – which are so essential now. Administrative order 18/2020 “Cura Italia”, issued on March 17, reveals the difficulty lawmakers encountered in interpreting the many needs of this distinct sector. Accordingly, we felt it was of utmost importance to facilitate the category by identifying areas of exclusion that may emerge in the future provisions of support and assistance.

Observations by the Osservatorio Culturale del Piemonte /Cultural Centre of Piedmont about the effects of Covid-19.

In a context that has radically changed, one necessity was clear from the beginning: to quantify losses in order to orient policymaking. Along these same lines, an examination by the Osservatorio Culturale del Piemonte /Cultural Centre of Piedmont (a partner of the Foundation Fitzcarraldo), has just completed the initial phase of monitoring the effects of Covid-19 with respect to the first week of closure in the cultural sector, from 24 February to 1 March, based upon the data supplied by 460 organizations in the Piedmont region. At the beginning of April, the second phase of monitoring began, examining the period from 2 March 2020 – 3 April 2020, limited, as before, to the cultural sector of the Piedmont region. In addition to Piedmont, the regions Emilia-Romagna, Apulia, and Tuscany, in collaboration with the OCP, have started ad hoc surveys about their own areas to gather information and allow for comparison on a national scale.

More than 600 organizations and cultural professionals participated in the two phases of the examination. The evaluation of economic losses – between February, the 24th and March (first phase), and then from the March, the 2nd, and Aprile the 3rd (second phase) – are around 20ml euro in the Piedmont region and 14ml euro only in Turin. If you consider only museums, cinemas, and live performances – where OCP did a thorough analysis – the losses are at least 16ml euro. It would be 6ml for museums; 4.8ml for cinemas and 5.2ml for the live performances.