Harinera ZGZ Prototype: The way to focus on what matters: participation, diversity and inclusivity in culture (video) 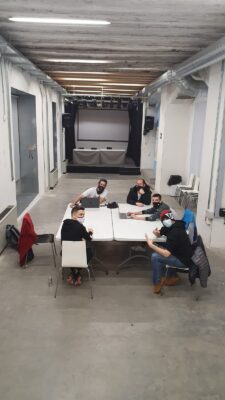 Harinera ZGZ Prototype: The way to focus on what matters: participation, diversity and inclusivity in culture (video)

One of our artistic partners Harinera ZGZ has been working on a collaborative process prototyping experiences to promote participation, diversity and inclusivity. They decided focs on young audiences after a process developed with Adeste + Methodologies leaded by the Spanish knowledge partner Universiy of Deusto. They followed a series of workshops based on the principles of design thinking. Harinera is a space for community culture and they needed to adapt the toolkit to specific needs.

In the first place, the group delved into the community structure and delimited three different layers of members according to their implication: Attenders, people involved in management and people implicated in programming. Consequently, three different approaches to work on the development of the Harinera project were established. From this point, the community itself was able to identify two specific targets to focus on.

According to the human centred design, the group defined a real person (PERSONA, a tool from our blueprint) to represent each target, and so the Harinera community visualized Fátima (a migrant woman) and Álex (a young person interested in undertaking a cultural project). Nevertheless, after validating ideas and assumptions, the community decided to focus just on Alex, and as a result, Lánzate con Harinera was born.

Lánzate con Harinera’s aim has been to enlarge the core community of Harinera ZGZ by involving young people (from 14 to 29 years old) in the programming. For this reason, Harinera ZGZ launched a call to select four projects to guide them by providing professional support, so they could get use to Harinera’s participatory model. Selected projects were:

To sum up, Lánzate project has certainly been a success that has exceeded our expectations and above all, it let Harinera open up the community to new people.