University of Deusto: “ADESTE, where everything started” 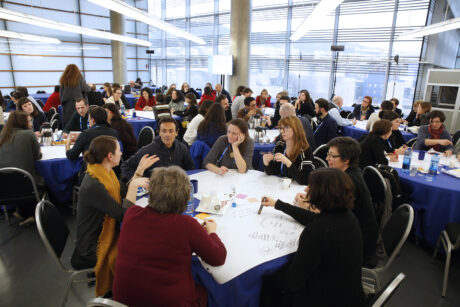 I am writing this article with a little bit of nostalgia, as I realise that it has been already 8 years since the first ADESTE. That was our first European Project on Audience Development and since then many other projects have followed. All of them have allow us to learn a lot and to create at the University of Deusto a line of research and a postgraduate training path that didn’t exist before.But above all, these projects have enriched us with new international friends, without whom I couldn’t imagine our work at international level at the moment. Let us look back.

ADESTE started in 2013 and was focused on defining the professional profile required to develop audiences in cultural organisations; what we called the“audience developer”. We interviewed several experts across Europe to identify training needs and to define a training programme for cultural professionals. Two fundamental ideas that were applied in ADESTE were the need for a long-term approach as well as the importance of soft skills to develop audiences. Therefore, after a couple of initial workshops, we asked participants in all the countries to develop their own Audience Development Plans and we supported them with the Action Learning Methodology. Some participants implemented their planssuccessfully (as Zaragoza Cultural that is now an ADESTE+ partner), but some others failed, because something else and more profound was needed: a real organisational change. The seed of ADESTE+ was already planted by then, even though the projectdid not start until 2018.

In between ADESTE and ADESTE+ we also participated in 2016 in the “Study on Audience Development – How to placeaudiences at the centre of cultural organisations”, a project that analysed 30 examples of good practices in Audience Development across Europe and whose findings are a reference in the sector and can be downloaded from the EngageAudiences website.

In 2017 another important project started: CONNECT. In this case, the University of Deusto was the project coordinator and the aim was to bridge the gap between the academic and the professional world in the field of audience development. The most important result was the so called “Twin Track Programme in Audience Development”. This programme was based on the concept that postgraduate students and senior practitioners from cultural organisations attended a course where they were paired and asked to work in couples on an audience challenge in the form of an action-research project that they should define and implement together in the cultural organisation where the practitioner worked. In order to make this happen, students became interns of the practitioners’ cultural organisations during the months of the action research project. A mentoring programme was also setup to support both students and practitioners throughout this process. Our postgraduate programme “Expert in Audience Strategy” is a legacy of this project in Spain and also the rest of the countries (Italy, Poland, Denmark, UK) enjoyed different CONNECT legacies.

It is worth highlighting that during one of our meetings (Rome, 2018) we also decided to make public the following manifesto.

As educators, facilitators and cultural practitioners we believe in connecting across borders to bring about cultural change.

Our approach is based on these principles:

Probably, those of you who have participated one way or another in ADESTE+, will recognise these principles in what we do today. Now you know something more about what has brought us here.