Adeste+ European Conference 2021, an opportunity to openly discuss what is needed to unlock the power of culture and make it more relevant and accessible 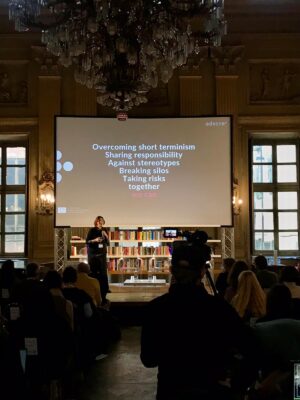 From audience to people. Unlocking the power of culture just wasn’t the Adeste+ European Conference 2021, it was an opportunity to openly discuss together what is needed to unlock the power of culture in Europe and make it more relevant and accessible to citizens and communities. Therefore, the first day of the #adestefinalconference was dedicated to the Adeste+ journey, its learnings, impacts and legacy.

While wrapping the process up a key idea resonated, emotions.  And certainly, this is the best image we can use to sum up Adeste+ journey, which began in 2018 and embarked 15 partners. It aimed at finding a way to improve cultural participation and tackling the necessary change for it.  For that reason, “from audience to people” is the best claim for this journey that all we have made together artistic, knowledge partners and policy makers.

While wrapping the process up a word resonates several times: emotions.  Without a doubt this is the best image the journey that began in 2018 and embarked 15 partners to find a way to improve cultural participation and prepare the organizational change for it.  Therefore,”from audience to people” is the best claim for this trip that all we have made together artistic partners, knowledge partners and policy makers.

But how was the journey on board? How did fellow travellers experience the journey? What did it mean for them?

According to Matteo Bagnasco’s intervention this conference was “not the final of #adesteplus, it is an opportunity to collect ideas and discuss how to improve real participation in cultural organizations”.

To foster cultural participation the consortium decided to work on two different levels: On one hand, audiences and on the other, cultural organisations.  Without a shadow of a doubt this was one of the main characteristics of Adeste+ journey. And as Simona Martini from Fitzcarraldo Fondazione said, this was possible because of the use of two different kinds of thinking, divergence and convergence. 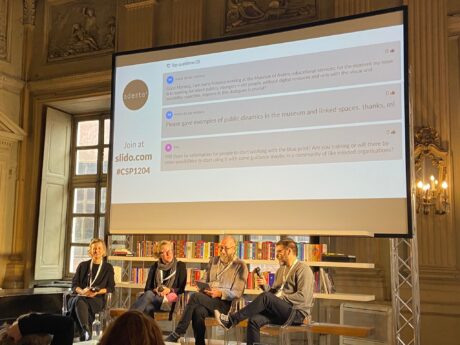 As partners in crime, artistic partners got involved in the process trying to embed change into their organisations.

Another feature of Adeste+ process was the involvement of artistic partners. In the words of Niels Righolt from CKI, we needed artistic partners to become “our partners in crime”. We needed them on board to try to find out if audience development could be a relevant issue for the organisation workforce”. Precisely, this is what differences Adeste+ from the rest of European projects that focus on audience development.

The role of artistic partners was key in developing and testing the Audience Centred Experience Design methodology (ACED). Through ACED methodology cultural organisations had the opportunity to open a room for reflection and  to question methodologies and methods. “Stop being a boss and become a leader”, Beata Dubiel-Stawska from Poland said when reflecting on the role cultural organisations CEOs should have when tackling cultural participation processes. Antonija Letinic from Kultura Nova Foundation focuses on the process, she hightlights that small organizations need to freeze, stop for a moment and think.

The decision of using design thinking tools with cultural organisations was risky and brave, as usually artistic organisations are not used to this kind of methodologies. Nevertheless, it gave them the opportunity to experiment, to think of the minimum viable product and to fail, when necessary. This was the idea Ilidio Louro from Mapa das Ideas has defended.

As partners in crime, artistic partners got involved in the process trying to embed change into their organisations. Along the process they experienced some “wow moments”. Most of these significant moments took place during the prototyping phase. For instance, the Gulbenkian Foundation’s wow moment happened when bringing the youngsters into programming, a moment in which they shared with them the decision making capacity. As a matter of fact, Empathy was an important phase of along the prototyping process.

Firstly, Susana Gomes da Silva remarked that “by choosing the youngsters, we don’t just fill this gap, but it makes us see the box in a different way, just with fresh eyes”. To be able to change our programming according to audience interests  “we need to involve audiences, to engage them and to listen to them. Acting together, thinking together and making decisions together.

Secondly, Dilek Latif from Mercury Theatre indicated that “organisational thinking around AD, it is not just one person’s job”. If we, as venues, want to have more diverse audiences coming to our shows we need our space to be safe, a community’s building.

Thirdly, Julve Venjø from Nørrebro Teater literally recommended the use of design thinking for audience development.  “Try the audience canvas! It made us find out what personas we want to reach and what to give to them, to make sure we keep audience-centred communication. It made us think about our own values”.

Last but not least, Harinera’s prototype focused on the youngest also. It aimed to develop communities around culture and promote access to culture as a right. Diego Garulo shared a moving video about the European project impact in the organization.

Nevertheless, there were some artistic partners which found some difficulties on the way and, as Teatro Stabile recognised, thinking out of the box when you are the box can be a big deal.

The Ivan Zajc Croatian National Theatre process was also kind of complex. They started so many processes and after six different plans they reached an end. At last, after reshaping the box once and again, they will open a theatre museum in the coming weeks. Museum that has been created to have a key role in relationships with audiences.

Finally, the session ended with Lisa Baxter who attended as Adeste+ critical friend. She focussed on experience design, underpinning values as core for the relationship between institutions  and their audiences. She dove into the process that takes cultural organisations from leadership to leadershift, who is leading what? We need willingness to challenge our cultural mental boxes.

The event “FROM AUDIENCE TO PEOPLE: Unlocking the power of culture” was in Turin from 10th to 12th November. In the next few days we will upload the resources (videos, articles, photos and documents) available on our website. Sign up to receive our newsletter and we will notify you when the content be ready.